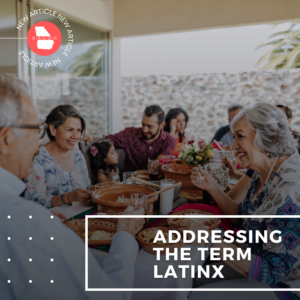 The emergence of “Latinx” has become the newest way to refer to the Latino community with a  gender-neutral term. However, according to the Pew Research Center, around 76% of Latino adults have not heard the term “Latinx” (Noe-Bustamante et al., 2021). However, as the Hispanic-Latino community grows, the term “Latinx” has been considered positive or negative for those unaware of the word.

To understand how voters felt about the term, a poll was conducted by the business management consulting firm Bendixen & Amandi International. They surveyed 800 registered voters of Hispanic-Latino origin, which showed the divided reaction. The survey found that 40% of the respondents said that the term bothers or offends them, and 30% said they would be less likely to vote for a politician who uses it (Stump, 2021).

According to Politico, Democrats began to seek out Latino voters by using the gender-neutral term to secure the Latino vote; however, studies and polls show counterproductive efforts. The use of “Latinx” in politics has started to show a fault line in the party between traditionalists and activists (Caputo and Rodriguez, 2021). As activists and academics are moving forward with using the term “Latinx,” the traditionalists believe that it is not following the gender binary nature of the Spanish language. With a division in the term between traditionalist and activist, it has still become politicized within recent years.

For example, in June of 2021, President Joe Biden was mocked by conservatives on Twitter for saying that “it’s awful hard … to get Latinx vaccinated as well.”

Language researcher and author Dr. Jose Medina spoke to ABC News and explained why it’s so hard to refer to a complex group with a single term. According to Dr. Medina, it is difficult to label a complex ethnic group in one word since it connects people from more than 20 countries in Latin America and the Caribbean (Moll Ramirez et al., 2022).

With the term becoming more dominant in a political setting, it comes down to who the audience is. The younger audience is more likely to accept the term “Latinx” as it promotes a gender-neutral approach, while the older audience may not favor it because of the structure of the word.  Angelica Luna-Kaufman, the senior director for the Texas Democratic Party, told MSNBC, “Just because you’re trying to be inclusive with one portion doesn’t mean you’re necessarily alienating another portion (Stump, 2021).” The overall intention of using the term “Latinx” in a political setting isn’t to be rude and offend the community but rather to find a way to address the community without using a specific gender.

As the younger generations become of age to begin voting, we are more likely to see an increase in the term and acceptance from the traditionalist.

Your ticket for the: Addressing the Term “Latinx”