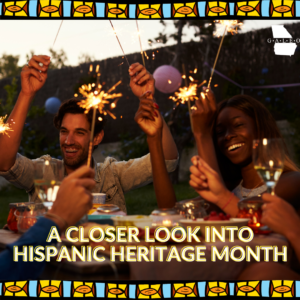 It is Hispanic Heritage Month (or “HHM”), a month that celebrates the culture, history, and pride within the Hispanic community. As our community celebrates throughout the months of September and October, it is important that we highlight the history of this holiday as well as the impact it has had on our communities. Hispanic Heritage Month kicks off every year on September 15th until October 15th, which to some may be odd. However, these dates have great significance for the Hispanic community.

Internationally, September 15th is known as the day the Act of Independence of Central America was ratified by five Central American countries: Guatemala, Honduras, Nicaragua, El Salvador, and Costa Rica. These five countries declared their independence in 1821 after being under Spanish colonial rule for hundreds of years. Many attribute the Mexican War of Independence, which began 11 years prior and celebrate their independence on September 16th, as the instigating force behind these liberation movements in Latin America. Other Latin American independence days in September include Brazil’s, which is on September 7th, and Belize’s, which is on September 21. President Lyndon B. Johnson designated September 15th as the first day of Hispanic Heritage Week in 1968. It wasn’t until 1988 when Ronald Reagan signed a bill that extended Hispanic Heritage Week to a month and it has remained that way since.

Since this holiday’s creation, people have used this time to educate their community about issues and advocate for more equal rights. Many believe that companies and politicians take advantage of Hispanic Heritage Month because they pander to the community in hopes of achieving financial gain. Taking the time to educate leaders and influential people about Hispanic Heritage Month and its significance can make the difference between honoring Hispanic and Latinx people and using them.

Over the years, people have also called for more inclusion during the month. Many have voiced the opinion that the narrative surrounding HHM has always centered around lighter skin Hispanic and Latinx people, excluding Black, brown, and indigenous people. Prominent examples of this exclusion can be seen in media, where actors that have a lighter complexion such as Salma Hayek will be favored over actors like Yalitza Aparicio. For an inclusive, and culturally accurate celebration of the month, there needs to be more inclusivity.

Celebrate this month by attending events in your community and by being inclusive and prideful in your culture!

Your ticket for the: A Closer Look into Hispanic Heritage Month