A Possible Path to Citizenship 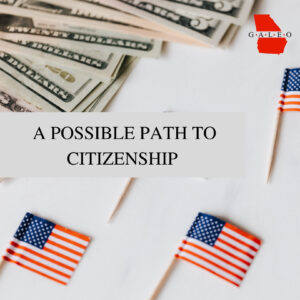 On August 24th, 2021, the House of Representatives passed a 3.5 trillion dollar budget resolution that could greatly affect the lives of millions of Americans. House Democrats set aside billions of dollars to improve the quality of life for working-class families by proposing Medicare expansion, paid family leave, and child care. Immigration reform, however, is also a possibility with the passing of this budget plan.

With over 10 million undocumented immigrants today, it is immigration reform that is one of the most controversial yet necessary tasks that lawmakers have to deal with. Democratic lawmakers hope to provide solutions for undocumented individuals by proposing some time of immigration reform that creates a clear and more efficient path to citizenship. Providing legal status to the undocumented individuals would require lawmakers to adjust current immigration law, which has been pretty stagnant. Since the implementation of Deferred Action for Childhood Arrivals, also known as DACA, immigration law has not provided solutions to those who arrived in adulthood. DACA is on the line due to the recent Supreme Court ruling.

According to the poll, there is strong support from the public of both of these proposals. For the Dream Act of 2021, which allows undocumented people who came to the country as children and have grown up here to have a pathway to citizenship and protection from deportation, the total percentage in support is 72%, much greater than total percentage of those who oppose (19%). The second question proposes a pathway to citizenship for Dreamers, immigrants who work in essential industries, and temporary protected status holders facing violence or natural disasters in their home countries. This second question also sees strong support with 63% in favor, while the total percentage in opposition is 36%.

With increased support and the passing of the budget resolution, many are optimistic for positive reform. Many hope that any reforms passed are in the best interest of the undocumented community and help them live a more prosperous life in the United States.

Your ticket for the: A Possible Path to Citizenship

A Possible Path to Citizenship