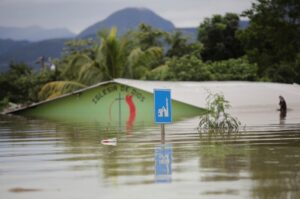 Since the beginning of its creation, the United States has been defined as a nation of immigrants. It exists only because of the continuous intake of foreign newcomers, ultimately establishing a unique culture composed of people from diverse backgrounds. However, the immigration flow has shifted since Latin Americans have gradually entered the United States at higher rates than in previous decades.

Information from the Pew Research Center shows the number of immigrants from Latin America and Mexico increased from 3% to 29% between the years 1960 and 2010.

Why do Latinos migrate to the United States?

There are several reasons immigrants leave Latin American countries to build a permanent life in the United States. A few of those factors include violence, corruption, inadequate education, and lack of resources in their motherlands. However, an aspect not often discussed relates to environmental issues. In fact, climate change interacts with all domains of migration. Understanding how climate change affects communities in Latin America may contextualize general Latino migration to the United States.

Environmental factors involving climate change have exacerbated Latin American emigration. Two phenomena are essential in understanding the implications weather and climate have on agricultural communities such as those found in Guatemala.

The first is the Central American Dry Corridor (CADC) that spans southern Mexico, Guatemala, Honduras, El Salvador, Nicaragua, Costa Rica, and Panama. The Dry Corridor is a region known for its extreme susceptibility to climate change. It is known explicitly for experiencing periodic drought and flooding patterns that disrupt the cultivation and harvesting of crops such as maize, beans, and coffee. 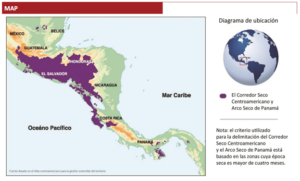 Image from Food and Agriculture Organization of the United Nations.

The second phenomenon is the El Niño-Southern Oscillation (ENSO) cycle, an irregular pattern of winds and sea temperatures across the Equatorial Pacific Ocean, affecting eastern Asia and the Americas. When El Niño happens, warm winds from southeast Asia move toward Central and South America, resulting in floods across some Latino nations. El Niño recedes to Asia when an upwelling of deep, cold ocean water rises near Central and South America, creating floods and droughts across different regions in Latin America. This part of the oscillation is called La Niña.

The ENSO cycle perpetuates the agricultural suffering in countries comprising the Dry Corridor because its movement determines the occurrence of either droughts or floods. In other words, farmers suffer the loss of a harvest and will no longer have a form of income or food source. It’s even more challenging to prepare for this because no two events and two sets of impacts are precisely the same. There might be too much water or no water at all. The result is emigration from Latino lands.

In April 2019, sixteen-year-old Juan de Leon Gutierrez of Tizamarte, Guatemala, did just that. He migrated to the United States to earn money he could not make as a farmer in the Dry Corridor. The drought in his hometown left his family malnourished with no aliments to eat or sell. Food insecurity was a serious issue. Unfortunately, he fled the effects of climate change to later die in U.S. custody from an infection in his brain.

Other effects of climate change include mudslides, tropical storms, and hurricanes. These natural disasters harm populations by disrupting a nation’s clean water supply, transportation routes, and housing. Honduras is one of those nations that has been plagued with several natural disasters.

In 1998, a Category 5 hurricane, the highest level on the Saffir-Simpson Hurricane Wind Scale, hit Central America. Hurricane Mitch was the second deadliest hurricane on the Atlantic, killing and displacing thousands of people. Honduras especially felt its effects as it left millions homeless. This natural disaster prompted Honduran migration to the United States.

Since Hurricane Mitch, Honduras has experienced several more tropical cyclones. More recently, the nation saw two Category 4 hurricanes, Eta and Iota, in November of 2020. Families lost their homes, farms, schools, and roads to landslides and flooding. Water systems collapsed, and thousands of families were displaced. It was again prompting Honduran migration to the United States.

Climate Change in the Cycle of Agricultural Poverty

Climate change is a severe factor influencing Latin American migration into the States, especially in countries with an immense farming population. However, it is not the sole reason Latinos make the journey. It’s a nexus of factors that intersect with climate.

Changing climate patterns are creating inconsistent harvesting schedules, leading to food insecurity and ultimately malnutrition. Tropical storms, landslides, and flooding are also displacing entire communities. This, coupled with corruption and violence, creates a weakened governmental infrastructure unable to help the suffering agricultural community. Adding inaccessibility of education only further complicates the situation because farmers are limited to working only in the fields, meaning they are more likely to remain in a cycle of poverty.

Migration to the United States

Hoping to leave this cycle of poverty, Latinos from Mexico, Central America, and South America make their way to the United States. Once they cross the US-Mexico border, they move to cities that offer labor opportunities. Amongst those cities is Atlanta, Georgia. 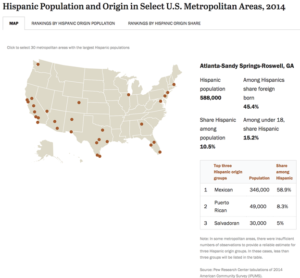 Though more data is needed to identify climate change migrants in Georgia, it is evident that climate affects migration patterns. Latino immigrants entering and residing in the state can look to institutions such as the Mexican Consulate, the Latin American Association, the Latino Community Fund, GALEO, and others for resources.

In addition to local and state organizations, federal intervention is necessary to maximize the resources of vulnerable migrants. The United States can specifically help climate migrants through Humanitarian Parole, Deferred Enforced Departure (DED), Temporary Protected Status (TPS), and the Compact of Free Association (CFA). However, the U.S. does not recognize those displaced by climate change as refugees.

International aid is also coming from the United Nations, World Bank, and CARE International, to name a few.  Additional aid is being dispatched through the Biden administration. According to the Council on Foreign Relations, Biden plans to send 4 billion dollars to the Northern Triangle of Central America, which includes Guatemala, Honduras, and El Salvador, to “assist civil society organizations, reform-minded public institutions, and vulnerable communion to reducing poverty, curbing violence, and building climate resilience.”

Your ticket for the: Climate change as a catalyst for Latino migration to the United States