Colorism in Our Communities 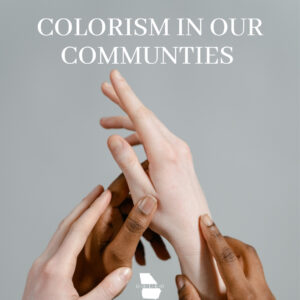 Colorism plagues the existence of Latinx and Hispanic individuals in the United States. As communities fight external conflicts such as voter suppression and poverty, conflicts such as colorism are often pushed aside. Despite this, colorism is still a heavily prevalent cultural and political issue.

Colorism is the preference for lighter-skinned individuals at the expense of people with darker complexions. Due to the large diversity of Latin America, the problem of colorism is part of every facet of society, especially representation in the media and politics.

As there is a surge in Latinx and Hispanic-centered media, representation is perhaps at its highest point. In 2021 alone, there are several blockbuster movies such as In the Heights, West Side Story, and Eternals that feature Latinx or Hispanic leads. This increased representation in the media has sparked conversations about clear displays of colorism. While they showcase diversity, colorism thrives as most of the leads represent lighter-skinned individuals. In the Heights is the most prevalent example of colorism and clear bias. While In the Heights had one of the most diverse casts, many were angry at the lack of black Latinx actors in the leading cast.

In the political realm, most Latinx and Hispanic elected officials tend to be lighter-skinned or white-passing. This perpetuates a trend of white people and white-passing people keeping the power in our government. Colorism makes it harder for darker-skinned individuals from accessing these positions of power and representing people who look like them.

Colorism directly harms Black people and darker-skinned people as they limit opportunities and disenfranchises them more than non-Black and lighter-skinned people. Ultimately, representation is not impactful when Black and other non-white individuals are continuously sidelined and marginalized due to their skin color. The Latinx and Hispanic communities have to face internalized colorism and call for more representation that extends past white-passing individuals.

Your ticket for the: Colorism in Our Communities

Colorism in Our Communities