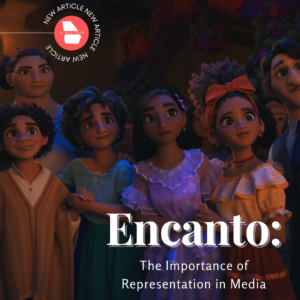 Ever since its release, Disney’s “Encanto” has won the world over with its spectacular animation and beautiful music performances from an all-star cast. One of the strongest points of the movie is that this is one of Disney’s first times showing representation of Latinx individuals and their culture. This is further highlighted by the popular posts that are appearing on social media that show Latinx children brimming with joy at the sight of cartoon characters that look just like them. The movie “”Encanto””’s great success, and overwhelming popularity shows how important positive representation in media truly is for millions of movie fanatics across the world.

Throughout all of Disney’s filmography, the primary culture that most of their projects are focused on is European culture, especially with their ways of storytelling. This usually involves settings with grand castles from an older time, princesses in distress, and evil witches and their magical concoctions. Recently, Disney has started to show a wider variety of different cultures found worldwide, and “Encanto” is an excellent example of this. It shows Colombian culture in all its beauty, from traditional clothing, various tasty platters,  and amazing architecture. These aspects of the movie are key to opening the world to a culture that is often not portrayed on the silver screen. In general, these kinds of movies educate society to welcome different kinds of people, especially to the youth. Too often have different forms of media portrayed cultures that “look different” as criminals, having aggressive attitudes, or as exaggerated caricatures. And in doing so, it results in people resenting others that simply don’t look like them, since sometimes this content is the only form of representation that they are exposed to.

With the grand success of films such as “Encanto”, there is great hope that things are changing for the better in the world of film and television. It shows that people are excited to see media that portray different lifestyles than their own, and that they are open to learning about various cultures.

Your ticket for the: “Encanto” and the Importance of Representation in Media