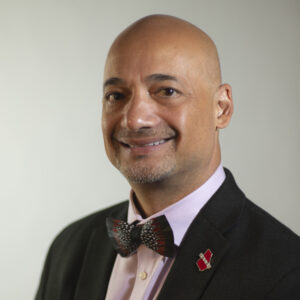 My name is Jerry Gonzalez, Chief Executive Officer of the Georgia Association of Latino Elected Officials (aka GALEO), the GALEO Latino Community Development Fund and the GALEO Impact Fund.  Our organizations are focused on promoting civic engagement and leadership development of the Latinx community in Georgia.  Our promise to our community is to build a better Georgia where our communities are respected and honored for our significant contributions to our state.

GALEO was started in 2003 by then State Senator Sam Zamarripa, State Representative Pedro Marin along with myself as its founding Executive Director.  Our idea was to create a catalyst of engagement of the Latino/Hispanic community in our state to ensure our voices were heard, respected and courted for policy matters that impact our communities directly.

GALEO focused our work to ensure our community is engaged and involved in policy decisions and are active participants in our democracy.  We assist eligible citizens to register to vote, often overcoming language access barriers.  We encourage Latinx voters to turn out to vote in all elections.  Our organization has assisted newly naturalized citizens to register to vote at naturalization ceremonies where we have successfully assisted over 40,000 new Americans with the voter registration process.  We have assisted Legal Permanent Residents with their citizenship applications in order for them to become U.S. citizens and participate further in our communities, including exercising their right to vote.  We have assisted Deferred Action for Childhood Arrivals (DACA) apply for their work permits in the years past.  We have encouraged participation of all Latinos in two Census enumerations in both 2010 and 2020.  We have advocated this Legislature in favor of pro-immigrant policy solutions and also advocated against anti-immigrant initiatives.  We even testified during the last redistricting cycle in 2011 against the legislative maps because of intentional dilution of Latino community’s ability to elect candidates of choice, especially in Gainesville where the city was carved up into several districts to avoid minority majority population thresholds.  We have advocated for a federal solution to our broken immigration system and we are supportive of current efforts to ensure some immigration reform relief through the current Congressional Budget reconciliation process.

Under our leadership development efforts, we have graduated over 687 people from our annual and statewide GALEO Institute for Leadership, with our current co-hort of over 25 participants scheduled to graduate in November 2021.  We have partnered with Georgia State University to provide our leadership skills development to Latinx scholars for several years now.  We have conducted several annual Latino Leaders Summit where Latinx community members continue to come together to learn about our policy priorities and how to engage with policy makers, enhance their professional and community organizing skills.  Furthermore, we have also conducted Latino Leadership Series in both English and Spanish in Savannah, Columbus and we are going to Dalton for our next one.  Due to the ongoing pandemic, we do hold many activities via zoom and also stream them on facebook live for greater access to our communities.

Since 2003, the Latino electorate and the Latinx community have clearly grown into the fabric of Georgia and are an integral part of our present and a significant factor for our state’s future.  To begin with, the Latino electorate has grown from just 10,000 Latino voters in 2003 when we were founded, to well over 385,000 voters in our most recent 2020 elections, representing over 4% of Georgia’s electorate.  In the report we recently published, we documented that the Latino electorate grew by over 141,000 voters since the 2016 election alone, demonstrating a 58% growth rate.  The report is significant because we partner with NALEO Educational Fund to conduct a surname match of the electorate, which otherwise would miss over 35% of the total Latinx electorate.  More information is available in the report.  All of you should have received a letter from me on the release of the report and a link to the report was provided for your reference, as well as details about your current Latino voter constituency.  The majority of the Georgia Latino electorate is under the age of 40 and has registered to vote as early as 2020. Also, most of the electorate is female, and Latinas outpaced their male counterparts in voter participation.

On a national level, the Latino vote increased by 6 million voters since the 2016 election cycle, approaching a record number of 18.7 million voters in 2020. Reportedly, one in 10 voters was Latino in 2020. Additionally, younger Latinos ages 18 to 40, with about 2.4 million voters, were first-time and newly registered voters. The Latina vote was vital in many battleground states like Florida, Texas, Arizona, and Georgia.

The US Census Bureau released new population data showcasing the multiracial growth of the United States. In Georgia, there was a growth of 10.57% in the total population compared to the last Census published. Furthermore, the Hispanic community in Georgia grew by 31.6% and accounted for 26.3% of Georgia’s growth.

The Census data release demonstrates the continued growth and strength of the Latinx community in Georgia.  The Census is about power and money.  As the Georgia Legislature begins to draw lines for district maps, communities’ interests should be taken into account.  Legislative and local districts should be drawn to ensure that communities responsible for the growth get their fair share of both power and resources.  As the Georgia Legislature will soon convene for a redistricting special session, we hope you will respect the multi-racial change in our state and ensure appropriate maps are drawn to provide a more representative democracy that reflect Georgia’s growing diversity.

Our communities would also want for greater transparency of the redistricting process.  To date, the legislature has conducted several hearings across the state with significant input from community members demanding the same thing, greater transparency.  We need greater clarity on the process.  We would like to know the timeline of maps being drawn, the timeline of when maps are proposed to when and how community members can assess and possibly submit alternative maps directly to the Georgia Legislature.  Georgians need to have access to the maps and have an understanding of how and when the proposed maps will be presented.  Georgians should also have the ability to substantively comment and raise questions and concerns from legislators in the process.

Will everyday Georgians have access to the reapportionment legislative office or will it be for politicians only?  If so, what would the process be?

These are some questions that deserve answers for Georgians to understand, which would enable Georgians to further engage in our redistricting processes.

Given this legislative’s body passage of the most recent voter suppression law, SB202, there are concerns that the redistricting efforts will also be a form of voter suppression against people of color in our state.  Redistricting maps should meet the core underlying principles and legal protections of the Voting Rights Act.  Our communities are rightly concerned about tactics to undermine communities of color’s ability to elect candidates of choice through packing, cracking and voter dilution.

We do also know from many years of data and analysis that race is a proxy for partisanship, especially in the Deep South.  Because of this, there are strong concerns regarding the declining white population and the increasing communities of color population will lead to intentional discrimination against voters of color through the redistricting process.  Coalition districts of Black, AAPI and Latinx communities should be considered in order to elect candidates of choice for our communities of color.  The values and interests across our communities of color indicate a strong alignment on many issues like education, access to healthcare, pandemic relief, immigration and voting rights issues.

Many Georgians have already expressed their interests for more transparency.

There has been no effort to make any of this process more accessible to those who do not speak English, even as our Georgia community continues to diversify.

So far, legislators have not provided any feedback or responses of the concerns and questions raised by constituencies across the state with the initial set of redistricting hearings.  There has been no information shared about the process nor timeline.

We all know both the electorate and the Census enumeration indicate a decline of white voters and an increase in voters of color.  Communities of color share similar values and interests and should have a right to elect candidates of their choosing.  This legislative process should respect and honor both the growth of the electorate and population with fair districts drawn to the benefits of the communities that are driving the growth for our state.

Your ticket for the: GALEO CEO Jerry Gonzalez’s Testimony on Redistricting