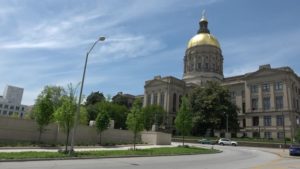 In the middle of a pandemic, America was hit with a surge of protests across the country in support of the Black Lives Matter movement. These protests took place in nearly every state across the country, in multiple cities. The uproar began when the public decided it was time to demand action be taken in cases of police brutality and cases where violence against African Americans is prominent in the country because of the killing of George Floyd, a 46 year-old-man African American man who was killed by Minneapolis police in May 2020 over the accusation of using a counterfeit bill.

Much like cities across the country, there were many protests that were organized in Atlanta in support of the Black Lives Matter movement. One case that this movement shined its light on again was the shooting of Ahmaud Arbery, who was a 25-year-old African American man who was jogging in a neighborhood in South Georgia by three white men. The man who shot Arbery, Gregory McMichael, profiled Arbery by stating that he believed he resembled a man who was involved with several break-ins (Fausset, 2020). The shooting of Arbery occurred in February 2020, but no arrests were made in the case until a video went viral in June 2020 of his killing. The case was brought up again by advocates because it had been months since Arbery had been killed before justice was served, and his killers were arrested for this obvious hate crime.

In June 2020, the Georgia Legislature passed and signed a new hate crime bill into effect, House Bill 426. Before this passage, Georgia was one of four states that did not have a hate crime bill enacted. The other three states included Arkansas, South Carolina, and Wyoming. The bill was drafted in the 2019 legislative session but was brought out to light with a stronger push from lawmakers and advocates during the events that took place after Arbery’s death in 2020.  House Bill 426 received a vote of 47-6 in the state Senate and was further voted on in the house with a count of 127-38 (Donaghue, 2020). The passage of this bill also means that judges will be able to impose a stronger sentence on individuals who are suspected of attacking others on the basis of race, gender, sexuality, and disabilities, amongst other characteristics. This new version also requires that law enforcement mandates data on hate crimes in the state (Hauck, 2020).

During the debate of House Bill 426, there were efforts being made by Senate Republicans to amend the bill so that it may include first responders and law enforcement as a protected class along with actual marginalized groups. While the bill was not amended to fit this narrative, another bill was simultaneously passed which was House Bill 838, also known as the Police Hate Crimes Bill. The passing of this bill in close proximation to HB 426 strips the value of protecting minority groups in the state because law enforcement is already deeply protected under state law. This bill is also dangerous because it would enforce the divide in the state by fueling the violence against Black people and their criminalization. (NAACP, 2020)

A previous bill had been proposed in 2000 but was shut down because it was deemed too vague by the Georgia Supreme Court. House Bill 426 was written to use more specific language and was passed when the session resumed after being put on hold to due concerns of the coronavirus (Donaghue, 2020).  A bill such as House Bill 426 has been long overdue in Georgia. It has been prominent that racism has not died and those who perform crimes on the basis of race should be properly convicted in the legal system. It is also important that the families and victims of hate crimes in Georgia receive proper justice and closure knowing that all is being done to avenge their loved one’s lives.

Fausset, R. (2020, April 28). What We Know About the Shooting Death of Ahmaud Arbery. Retrieved July 07, 2020, from https://www.nytimes.com/article/ahmaud-arbery-shooting-georgia.html