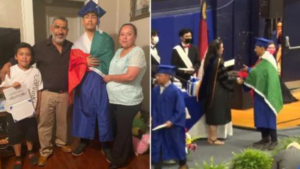 It’s graduation season and as students from all over the country are getting ready to walk the stage, many schools have implemented strict dress codes. While dress codes have always existed, students have pushed back against regulations that are rooted in racism.

Ever Lopez stood against Asheboro High School when he was denied his diploma for violating dress code and wearing a Mexican flag during the ceremony. The situation went viral on Tik Tok, where videos show the school’s principal, Dr. Penny Crooks, attempting to remove the flag as he walked on the stage. The situation then escalated as security was called to escort him and his family out for demanding he receive his diploma.

With over seven million views on Tik Tok, the videos forced the school to release a statement saying:

“The heart of the issue is the fact that the student did not follow the established dress code for the event and detracted from the importance and the solemnity of the ceremony.”

However, Ever and his supporters claim that other students also violated dress code by decorating their caps yet still received their diploma. Ever and his family claim that the issue had more to do with racism than the dress code violation. Community organizers gathered together to protest the school’s decision and also created a petition on Change.org.

100,000 signatures later, Ever finally received his diploma. On Monday, June 7th, he walked outside his school and showcased it in front of his community during a press conference and dedicated it to his parents. Ever said. “I’m grateful that I got what I deserved. Like my mom said, it’s not just mine, it’s everybody’s, the whole community that was with me, that had my back and it really means a lot.”

Your ticket for the: High School Grad Finally Receives Diploma Amidst Controversy