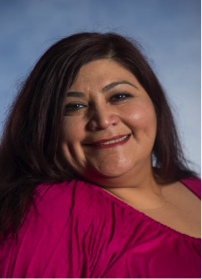 Kathy is grateful to be serving GALEO as the GALEO Leadership Council Chair. Kathy began her work with GALEO in 2006 when she took the first GALEO Institute for Leadership class and realized the support that GALEO gave to the Latino community. In 2013 she took the class again and her involvement with GALEO has been consistent ever since. She has served as the GLC Advocacy Chair-2013-2014, GLC Vice Chair-2015 and now has the honor of serving as the GLC Chair. She feels the committees and events that the GLC produces aligns with the mission of GALEO and is happy to be part of such a wonderful organization. Kathy also supports GALEO as a facilitator for the GALEO Institute for Leadership.

Kathy was born and raised in Los Angeles California. Her father was an immigrant from Guadalajara, Mexico. He came to this country as a musician in which he shared his vocal talents across Southern California. Her mother is a Los Angeles born native of immigrant parents who worked as part of the Bracero program in the 1940’s working on the orange trees.

Inspired by the artistic nature of her father, Kathy majored in Theatre at Cal Poly University, Pomona. There she was a founding member of REACH – Reaffirming Ethnic Awareness and Community Harmony. An organization that facilitated conversations in diversity. She later became a facilitator for NCCJ- National Conference for Community and Justice which dug deeper into the dynamics of diversity with surrounding areas of the Los Angeles Communities. This work earned her two City of Los Angeles Diversity Awards.

In 1998 she went to work at MDI (Modular Data Inc.) in El Monte CA, as a temp and worked on her first conversion. She was hooked! Troubleshooting the terminals working with the merchants was very exciting to her. The credit card processing world fascinated her and she wanted to learn everything. How it worked, what roles everyone played, what impact did our work have on the rest of the world? When asked what she did, she would answer: “I help money move all over the world!” In the fall of that year she became a permanent employee.

MDI soon became Global Payments Systems, then NDCeCommerce and eventually Global Payments Inc. Upon becoming Global Payments, the offices began to shift and a decision needed to be made. Would she be willing to relocate? She chose to come to Atlanta for a year in 2001 to assist with the MDI migration to Atlanta. 14 years later in Atlanta, she continues to carry that year contract she originally agreed to.

Kathy has had many roles in her 18 years with the company. She has worked in Customer Service, Account Management, Implementations, Product Support and now Project Management. It is in her role as a Project Manager that Kathy finds her complete joy.

When she is away from Global and GALEO, Kathy continues to cultivate her passion in theatre by being part of various Improv Groups in Atlanta. She also facilitates different Improv workshops around town. She is working on a nonprofit called Celestial Hearts, to help members of society find their true authentic voice and form strong communities. This includes working with communities in other countries such as Peru, Honduras, Mexico, Italy and England as well as the US. Kathy looks forward to meeting and working with you!

Your ticket for the: Katherine Vega