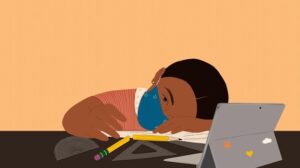 In August of 2020, a photograph of two young girls in pink, sitting on a curb outside of a Taco Bell in Salinas, California, went viral. These Latinas didn’t go to the fast-food restaurant for crunchy tacos or loaded nachos. They went for the Wi-Fi.

This viral image represents the digital divide that widens the education gap, leaving many minority students behind. Some students do not have access to the internet, do not have a computer, or share a single computer with other family members.

A SOMOS survey conducted early in the pandemic showed that 37% of Latinos did not have access to broadband internet, and 32% did not have enough computers to accommodate the entire family. Latinos across the nation, including those in Georgia, are experiencing this digital divide.

In an interview with 11Alive News, Nury Castillo Crawford, an academic director and lead for a Hispanic mentorship program in the Gwinnett County Public Schools system, said, “I feel like this is just another variable that helps widen that [education] gap, and then some of our kids might not ever get out of that.”

Similar to the Taco Bell story, Crawford shared details of knowing a local family that walked to a McDonald’s parking lot for their children to finish school work. As 33% of students in Gwinnett County are Hispanic/Latino, Crawford’s interaction confirms the digital divide in Georgia’s Latino communities must be addressed.

This divide has also impacted academic performance. Issues with lack of resources, such as study aids, stable technology, internet access, and educational support systems, have contributed to a drop in Latino students’ test scores. A study done by NWEA shows that Latino students scored lower in math and reading than their Caucasian counterparts during the fall of 2020. Renaissance Learning, Inc. reported similar findings in decreased math and reading scores for Latino students.

In addition, AT&T donated money to the Georgia Department of Education (GaDOE) for distance learning efforts. These funds were used to deploy 448 Wi-Fi rangers to 36 school districts, which Marietta chose to have on their school buses. Communities across the state celebrated the addition of these Wi-Fi buses.

GaDOE also partnered with Verizon to provide internet access, devices, and security solutions to 12.5 million students across Georgia and ten other states.

Your ticket for the: Latino student population falls behind as pandemic widens education gap