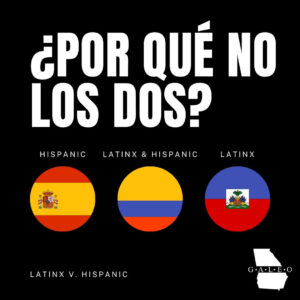 Introduction
A common misconception is that terms such as Latinx and Hispanic are interchangeable. If someone is an immigrant from Latin America, what does that make them? What about immigrants from Spain? Can more than one term be used, and if so, how? Understanding identity and the words used to describe it are nuanced and can vary person by person. Therefore, it is incredibly important that we understand the terms for what they are.

In the 1970s, there was a boom in immigration to the United States from Latin America, especially from Mexico and Puerto Rico. The term “Hispanic” first emerged as a method of identifying them on the U.S. Census in 1980. Prior to this, people with Latin American origins struggled finding a term that they could identify with. Hispanic became that term. Despite this, many criticized it because it includes people from Spain, who do not share the same cultural experiences as people from Latin American descent.

Latino became the obvious alternative because many believe it captures the history and culture of immigrants and includes folks from non-Spanish speaking countries such as Brazil. Yet the gendered term was not sufficient for many activists. In the height of LGBTQ+ liberation movements, queer and trans activists in Latin America coined the term Latinx to be more innclusive. While not as popular, the term “Latine” has also been used as a gender neutral alternative.

Modern Usage
Today, both terms are used within communities of Latin American origin with Hispanic being the more popular option and the only term officially recognized in the U.S. Census. According to Pew Research Center, one fourth of all Hispanic people in the United States have heard of “Latinx” while only 3% use it. The study also highlights the different usage rates between U.S.-born Hipanics and foreign born, indicating that those native to the United States have a higher chance of knowing it and using it. Due to its minimal use, Latinx is often ostracized. However, many activists fighting for more gender-inclusivity advocate for the term.

Which one?
In terms of political correctness, both Hispanic and Latinx can be used depending on who is being referred to. Many people from countries such as Mexico, Colombia, and El Salvador for example can use both while people from Spain can only use Hispanic and Brazilians can use Lainx. Ultimately,  it comes down to personal preference. Whether it is Hispanic, Latinx, Latine, or Latino/a, each has its own significance that cannot be oversimplified.

Your ticket for the: Latinx vs. Hispanic: ¿Por qué no los dos?