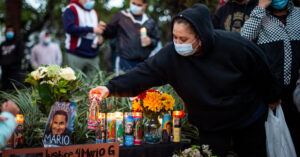 In the wake of the police murder of George Floyd, the United States saw massive

nation-wide protests calling for reform in the ways our criminal justice system works. The lack of accountability, lack of alternative services, and the lack of humanity displayed by police departments had pushed the black community and its allies to the edge. Millions marched in 2020 in the name of the thousands of unwilling black martyrs affected by police brutality. (1) Now, a year after Floyd’s death, many await the change we all desperately fought for. Some municipalities have implemented reform in the ways of reallocating resources towards alleviating the root causes of crime, adding stricter use-of-force policies, or providing de-escalation training for officers. Yet many more have either failed to make meaningful improvements or worse, have reinforced the systemic causes behind episodes of police abuse of power.(2)

Sadly, in a case echoing that of Floyd’s, the Latino community may have recently found its own martyr. Mario Gonzalez Arenales was a 26 year old Alameda man who died while under police custody on the morning of April 19th. That morning, officers responded to a report of a suspicious individual intoxicated at a local park. Talking to the man, the police eventually requested that he present his name and identification; Gonzalez failed to do so. In bodycam footage released by the Alameda Police Department, one can witness the tragic events that followed. The officers forcibly wrestled Gonzalez to the ground face down before one placed a knee on his back, holding him down. The next four minutes consist of Gonzalez pleading with the officers before losing consciousness. His last discernable words were “Please don’t do this.” At this point, the officers noticed his state of being and attempted CPR and application of Narcan. Mario Gonzalez was pronounced dead later in the hospital.

Despite the lack of media coverage, this type of deadly interaction isn’t as rare as one might think. A recent report released by UnidosUS estimates that over the past 6 years, more than 2,600 Latino deaths were recorded that were caused by police or in police custody.(5) As a percentage of total deaths at the hands of police, these numbers show a troubling disparity in how Latinos are affected. Out of every million , 4.2 Latinos are killed by police, compared to 2.3 per million for whites. Even worse, researchers note that the data ‘likely still undercount’ (6) the total victims either due to their race being mistakenly categorized as ‘white’, ‘other’, or ‘unknown’ or because the victims did not have surnames of Hispanic origin.This report is a wakeup call and should spurr us and our allies to take grand measures in the pursuit of justice.

Viewing this issue through an intersectional lens, it becomes clear how Afro-Latinos, triguenos, and individuals of mixed backgrounds could be further impacted by negative policing policies. Failures and biases are rarely clearly captured on film as they were in the case of CNN journalist Omar Jimenez. While covering the BLM protests in Minnesota in May 2020, Jimenez and his team were harassed and eventually arrested. This happened despite their compliance with orders, their media credentials being visible and valid, and cordiality in dealing with the officers. Afro-Latinos are very much ignored by society at large, and thus it becomes imperative that we shine a light on their specific issues.

Georgia Latinos, especially millennials and Gen-Zers, have come out in large numbers to show support for BLM. Racial justice and police brutality became a mainstream issue in the state after the extrajudicial killing of Ahmaud Arbery in February of last year. As we grow in numbers, we must demand that the government take special care when policing our community. Many crimes and abuses go unreported due to immigrant families fearing deportation which can lead to worsened conditions and even more fear of the police. This fear is not at all unfounded; many Sheriff’s Offices in the state subscribe to the 287(g) program which outlines cooperation with ICE to deport illegal immigrants once arrested. Recently, with the election of a new Sheriff, Gwinnett repealed the policy and promised to make further reforms to reduce harm on its growing population. (8) This is a huge deal seeing as over 48,000 American-born children in Georgia saw parents taken into ICE custody. The ripple effects are felt each and everyday not only by members of the Latino community but by all Georgians.

As a first-generation immigrant, I remember the struggles my family and I have faced on our journey to becoming American. If we want a better Gwinnett, a better Georgia, a better USA, it is crucial that we bring attention to these issues. We must advocate for accurate documentation of police abuse, we must decrease barriers to reporting crimes, and we must join our brothers and sisters of the Black Lives Matter movement in calling for racial justice reform at every level of government. Please join GALEO and other organizations in calling out great issues.

Your ticket for the: Mario Gonzalez and How Police Brutality affects Latinxs