Thank Your Phone Bankers: Getting Out the Vote During a Global Pandemic 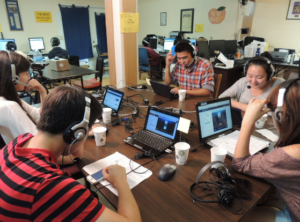 We have all received phone calls that we wish we would not have answered. We often regret picking up the phone for telemarketers, bill collectors, scammers, and now, more prevalently, phone bankers. As the 2020 General Election comes to a close, politics and civic duty has progressively become more relevant to every constituent in the United States. Information about this extremely polarized and complicated election has flooded even the most private areas of our lives. Because the topic consumes much of our attention often in a negative way, phone bankers are often met with reluctance and hostility. However, their persistent contribution to “Get Out the Vote” efforts has significant effects on elections.  Because of their commitment to democracy,  phone bankers deserve much more admiration than they receive.

I will preface this by saying that as a phone banker myself, I understand your aversion to phone calls about anything to do with voting during heated election cycles. Receiving cold calls about private information such as your vote is uncomfortable, especially when the call interrupts your lunch break, important meeting, or family time. I will be the first to say that I understand why we are often met with refusal to discuss these topics,  but I will also be the first to advocate for my fellow phone bankers and all of the important work they do.

During the COVID-19 pandemic, it quickly became apparent that campaigning tactics would have to change in order to rise to the challenge of contactless voter outreach. Since door-to-door canvassing was no longer a viable option, many campaigns began to invest greater percentages of their funds into phone banking, pamphlets in the mail, social media marketing, and other pandemic-friendly ways to inform voters about how to register, where to vote, how to vote by mail, and other important election questions. Here at GALEO, we have a team of phone bankers who work between two to four-hour shifts in order to contact as many voters as possible. Our team text banks and phone banks daily in order to answer every voter’s pressing questions about the election process.

Though we encounter many voters who are unwilling to engage in these conversations, data suggests that the effects of our phone calls are significant despite the fact that we often do not visibly see their fruits. According to a 2006 study performed by Political Scientist  David Nickerson at the University of Notre Dame, phone calls from nonpartisan organizations increased voter turnout by 3.8% (Nickerson, 2006). Now, I know that does not sound too impressive, but in a country with approximately 240 million eligible voters (Hauck, 2020), increasing voter turnout by 3.8% is an increase of 9 million voices heard. That is enough to sway the results of many elections state and nationwide.

Since COVID-19 has caused a greater reliance on phone banking, this percentage might be even higher as more constituents receive vital voter information from these two to three minute calls. GALEO and many other nonpartisan organizations strive to give every voter a voice within the United States. We acknowledge how crucial it is for all of our voices to be counted, and we call your phone with this intent in mind. Thanks to phone bankers, we have been able to contact thousands of people across Georgia, providing them with vital information for this general election. We understand the discomfort surrounding these phone calls, but we ask that you take some time to commend a phone banker the next time you get a call from one. You will never know if you will learn something without answering! Finally, to my fellow phone bankers, keep it up. Do not be discouraged because we are making a difference in our country during every conversation we have!

Hauck, Grace. More than 56 Million People Have Already Voted. Here’s How That Compares with Past

To Pledge to Vote for these upcoming elections, please visit bit.ly/P2VGALEO2020.

Your ticket for the: Thank Your Phone Bankers: Getting Out the Vote During a Global Pandemic

Thank Your Phone Bankers: Getting Out the Vote During a Global Pandemic