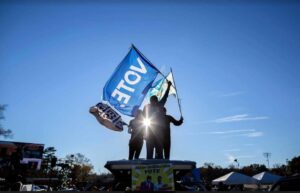 (Image from The Nation)

The social media posts, yard signs, constant phone calls and text messages, and even canvassers at your door. “All eyes on Georgia” for this election season was more than a slogan but a temporary lifestyle for us Georgia natives. There was much at stake, so our nation, as well as community, made sure we knew it. Throughout the process, we didn’t simply meet expectations, but absolutely took over headlines, broke record numbers and, most importantly, changed historical outcomes.

Let’s talk numbers. With a spending of approximately $366 million through December, this has been the most expensive senate race EVER. The 2020 election cycle has been twice as costly as the last presidential election (Evers, Georgia Senate.). However, it is evident that the money went to good use. With approximately 5.4 million eligible voters in Georgia, an estimated 4.5 million actively voted in the runoff.  That means about 83 percent of voters who have this right, exercised it. With a national voter turnout average of 60 percent, this is incredible. To put it more into perspective, Georgia had approximately 2.05 million voters turn-out for the presidential election, meaning we got more than double the number of people to vote for our state’s runoff.

Though these numbers are impressive, this election has proven and done so much more. Because of previous voter turn-out, analysts don’t traditionally account for lower income and marginalized folks. These people are voters who feel that the government has failed them and have disengaged with the government.

This cycle, however, has sparked a new atmosphere with voting. Maybe it was because the candidates weren’t simply talking to their voters but marching alongside them. Personally, this has been the first time I have seen representation of myself in campaigns or have ever felt, seen, and truly heard by candidates and their team members. Regardless of the reason, this election did not feel like a duty, but a right people were excited to exercise. From the vast number of volunteers, free food at polls, and mini dance parties at election sites, the majority was elated and hopeful when voting.

This is the Georgia we have one day hoped to see. The one that was built on civil rights movements and immigrant’s hard work. One that is uniting, voting, and rising together. It would be foolish to say our work is complete, but one thing is for certain: expectations have been raised and the pressure is on. We have the power to reclaim the levers of power in our democracy and even reimagine what is possible for the south.

Highlighting a few organization who have mobilized and played a great role in this election:

Your ticket for the: The Georgia Runoffs: Record Breaking Beyond Numbers