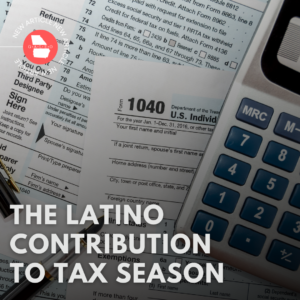 The 2022 tax filing season began on January 24th and will continue until the final deadline on April 18th. As the tax season is in session, the Latino community’s contribution to the U.S. economy and the Internal Revenue Service has been one of the most significant contributors (Power of the Purse: How Hispanics contribute to the U.S. Economy, 2017).

Regardless of status in the United States, the Hispanic community contributes to the IRS every year by filing their taxes either using social security or an Individual Taxpayer Identification Number (ITIN). The IRS created ITIN in 1996 so people who aren’t allowed to work in the United States could still file taxes on any money they earned (Campbell, 2017). It is important to note that the IRS does not share ITIN information with immigration authorities.

In 2010, the IRS reported that about 3 million ITIN holders paid more than $870 million in income taxes, which account for about 12 million immigrants living in the US  (Campbell, 2017). The money collected from undocumented workers who pay sales and property taxes funds public and local government services. According to an analysis by the Institute on Taxation and Economic Policy, it has added up to about $10.6 billion in state and local taxes (Campbell, 2017).

The Hispanic community also plays an essential role in sustaining America’s Medicare and Social Security programs by paying taxes. In 2015,  the Hispanic household contributed $101.8 billion to Social Security and $25.3 billion to Medicare’s core trust fund (Power of the Purse: How Hispanics Contribute to the U.S. Economy, 2017). In 2013, the Social Security agency reviewed how much money undocumented workers contributed to the retirement trust fund and found a contribution of $13 billion in one year  (Campbell, 2017). Undocumented workers do not benefit from the money they contribute to the agency.

As the Hispanic community is a significant contributor to the U.S. economy, a study released by California Lutheran University in 2019 noted that Latinos accounted for 82% of the growth in U.S. labor-force participation between 2010 and 2017, despite accounting for less than 20% of the country’s overall population (Imbert, 2019). With the growth of the Hispanic community in the workforce, the economic contribution of the U.S. Latino community is showing a significant impact on the economy through tax seasons.

Throughout February, March, and April, the IRS encourages everyone to have all the information they need in hand to make sure they file a complete and accurate return.  According to the IRS, having an accurate tax return can avoid processing delays, refund delays, and later IRS notices.

For any other questions or concerns regarding the IRS and tax season, check out the IRS website – https://www.irs.gov/

Your ticket for the: The Latino Contribution to Tax Season