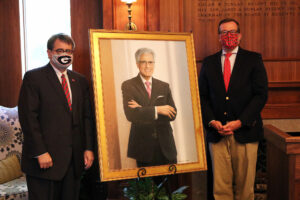 Friday, October 16, 2020 (Athens, GA) – As the month celebrating Latinx heritage draws to a close, the University of Georgia School of Law recently held a virtual portrait unveiling for Luis Aguilar, a 1979 graduate of the law school whose service on the U.S. Securities and Exchange Commission helped lead the country out of the economic upheaval of the 2008 recession.

“It is fitting that as we celebrate Latinx Heritage Month, that we celebrate this distinguished Cuban American who has contributed so much not only to the University of Georgia but to our country as well,” said President Jere W. Morehead.

Aguilar – who immigrated to the United States as a child refugee from Cuba and who describes himself as “the product of the generosity of the American people and the opportunities offered by the United States” – was originally appointed as a commissioner with the Securities and Exchange Commission by President George W. Bush in 2008 and reappointed by President Barack Obama in 2011. He ultimately served from 2008 to 2015 – making Aguilar the eighth longest-serving commissioner in SEC history as well as only the third individual to have been nominated by two U.S. presidents from different political parties.

Shortly after his tenure with the SEC began in 2008, Lehman Brothers went into bankruptcy and the stock market crashed. In the aftermath of the recession, the SEC entered one of its most active periods in history, helping to restore confidence and accountability in the agency and capital markets.

“Luis embodies our school’s ethic of service, and his instrumental role in salvaging the economy during the Great Recession will long be remembered as a great point of pride,” law school Dean Peter B. “Bo” Rutledge said.

Prior to his work at the SEC, Aguilar was active in both business and law. He has served as the general counsel, head of compliance, executive vice president and corporate secretary of Invesco. He also has been a partner at several prominent law firms, including McKenna Long & Aldridge, Alston & Bird, Kilpatrick Townsend & Stockton, and Powell Goldstein Frazer & Murphy.

“It is a great honor to have my portrait displayed at the University of Georgia School of Law,” Aguilar said. “Much of what I have been able to achieve in my life resulted from the tremendous education, training and support I received at the School of Law. I will always remember this recognition with great pride and humility.”

“It truly is a fitting honor for someone who has always worked diligently within the Latino community and has accomplished much for our nation, our state and the Latinx community,” added Jerry Gonzalez, CEO of GALEO recognizing the Honorable Luis Aguilar as a former board member of GALEO in its early years.

An image is online at https://news.uga.edu/wp-content/uploads/2020/10/Aguilar-portrait-unveiling-copy.jpg Cutline: President Jere W. Morehead and School of Law Dean Peter B. “Bo” Rutledge stand beside the portrait of Aguilar.

This release is online at https://news.uga.edu/law-school-honors-alumnus-aguilar-portrait/

UGA School of Law: Recognized as the best value in legal education in back-to-back years, the School of Law is also consistently regarded as one of the top law schools in the nation. Since 1859, the school has been preparing the next generation of legal leaders. It currently offers three degrees – the Juris Doctor, the Master of Laws and the Master in the Study of Law. The school’s accomplished faculty includes nationally and internationally renowned scholars, and its approximately 11,000 living graduates are leading figures in law, business and public service throughout the world. Connecting students to these thought leaders and opportunities to serve state and society is central to the school’s mission. For more information, see www.law.uga.edu.

NOTE: This press release was sent out in coordination with the UGA School of Law.

About GALEO GALEO’s mission is to increase civic engagement and leadership development of the Latino/Hispanic community across Georgia.