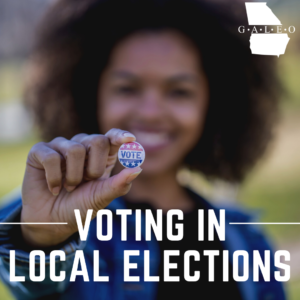 On Tuesday, November 2, Georgia will be holding its local elections for many different positions, including mayor of Atlanta. Citizens will vote on other official positions including mayors, city council members, sheriffs, school board officials, and many others. While these municipal elections are some of the most important elections for the citizens of Georgia, many are unaware of the direct impact the results of these elections have on our local communities. The results from local elections have important consequences. They determine which local officials will have the power to pass policies that have a direct influence on the day-to-day lives of their constituents. Additionally, local elections serve as a chance to implement necessary reform for the success of a community.

Voting in local elections is also one of the significant ways in which citizens of a community can make their voices heard. When there are many issues and concerns that need to be addressed, local officials spearhead movements to implement different policies to tackle a community’s problems. Because of this, it is essential to elect officials that have the best intentions and ideas to better the community. Additionally, local officials are more accessible to their constituents. Citizens tend to have an easier time contacting local officials to voice their concerns or bring attention to particular topics (Sherwood 2021). For instance, if a parent has a concern about their child’s education, it is much easier to get in contact with their school district school board official than the U.S. Secretary of Education, and their concerns could be easily resolved. Voting in local elections is crucial to movement in voicing the needs and concerns of a specific community.

Your ticket for the: Voting in Local Elections