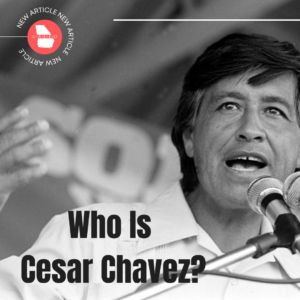 Farm workers play an essential role in today’s agriculture. However, it took a while before people could understand their importance and treat them fairly. During the Great Depression, migrant farm workers made around 40 cents a day and were barely able to provide for their families. In addition, they were forced to work under difficult conditions without receiving employment benefits. It was not until Cesar Chavez that migrant workers were seen and treated as essential workers.

Cesar Chavez was a Mexican-American labor leader and civil rights activist. Chavez witnessed first-hand the struggles and poverty of migrant workers. Chavez was born in Yuma, Arizona on March 31st, 1927. Once Chavez reached the 8th grade, his family moved to California and dropped out of school to work in the fields with his dad to help meet their family’s needs. At the age of 19, Chavez joined the Navy in which he served for two years. Once his service was over, he moved back to California and returned to work in the fields.

In 1952, Chavez began working with the Community Service Organization (CSO), a Latino civil rights group, to help register Latino voters and fight racial discrimination. After ten years, Chavez realized not much was being done for farm workers. He was determined to advocate for better working and living conditions for them, so he used his life’s savings to create an organization. Chavez, along with Dolores Huerta, founded the National Farm Workers Association, now known as the United Farm Workers (History.com Editors, 2009).

The National Farm Workers Association and Chavez were able to accomplish many significant breakthroughs for farm workers. They were able to establish minimum wage standards, wage contracts, safer working conditions, child labor reform, and advancements in civil rights for Chicanos and other farm workers. His passion and commitment to fight for migrant farm workers has created an impact in today’s agricultural industries. In 2014, President Barack Obama declared March 31st as Cesar Chavez Day to commemorate his legacy. Since then, many continue to remember and celebrate Cesar Chavez for everything he was able to accomplish for migrant farm workers (Clark).

Your ticket for the: Who is Cesar Chavez?