Were We Counted? How the 2020 Census Might Affect Latino Georgia 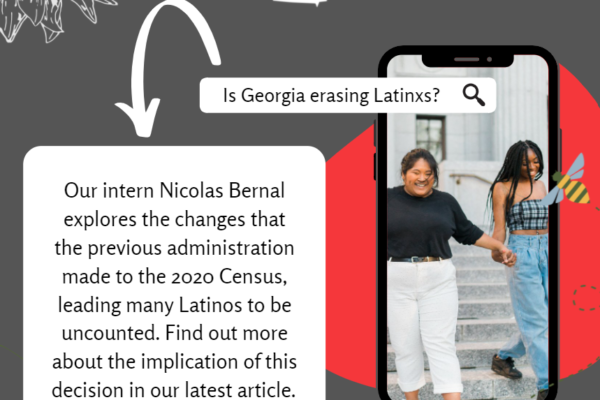 Since 1790, the United States has conducted a decennial enumeration of its population.

This process has three primary functions in our society: 1) reapportionment of electors and representatives, 2) redrawing of electoral districts, and 3) distribution of federal funds. Among the information collected in the 2020 census is the number of people living in a home, whether the home is owned or rented, the sex, age, race/ethnicity of the residents, and familial relationships of the individuals living therein. While the 2020 census was the first to offer three full response options (internet, paper, or phone), there are some systemic factors that led to the undercounting of the Latino communities. The U.S. Census Bureau responded to the COVID-19 pandemic by suspending key operations and reducing the number of active workers. Despite these challenges, officials failed to adequately extend the field collection period.

In March 2018, Wilbur Ross (secretary of the Department of Commerce) decided that after 70 years of dearth, the census would once again include a question about the citizenship of individuals. The change would logically lead to dissuasion of immigrants to participate in the census, thereby changing the official demographic count. A collective lawsuit was launched against Ross and the Commerce Department. The Supreme Court’s decided that despite the addition being allowed under the Constitution, the lack of genuine justification for the change constituted a violation of the Administrative Protection Act. Unfortunately, due to extensive media coverage of the administration’s intentions, it is expected that a consequential number of noncitizens failed to self-report. A 2019 Census Test sampling 480,000 homes found that areas with more than 49.1% Hispanic residents, areas with more than 4.9% noncitizens, and areas designated to receive bilingual materials experienced statistically significant lower self-response rates when the citizenship question was included.

The 2019 American Community Survey estimated that the Hispanic-Latino ethnicity constitutes 9.8% of Georgia’s population and thus is the third largest minority group in the state. Since the year 2000, the Latino population has grown by 129% and it continues to expand rapidly. For these reasons, it is becoming more and more vital to take the community into account when making policy decisions. Many states have found success in multimillion dollar marketing campaigns specifically targeting communities. Annually, $1.5 trillion in federal funds are distributed to state and local governments based on census data. This money is utilized in schools, housing, public transport, infrastructure, emergency services and more. When populations are undercounted, these public services become strained resulting in more crime, decreased standard of living, less job opportunities, and, in some cases, loss of lives.

Historically, undercounting has disproportionately affected minority communities and has resulted in long-term harm. The results of the 2020 census indicate a serious disparity between projected Representative reapportionment and actual results in states with fast-growing Latino populations. Inaccurate counts can allow for ruling parties to restructure electoral districts in their favor. The practice, referred to as ‘Gerrymandering’’, can disenfranchise minorities which tend to vote one way or the other. ‘Cracking’ can occur when minority constituencies are divided between multiple districts, preventing them from forming a majority in any one district.

Alternatively, ‘packing’ occurs when the minority group is solely placed in one district, minimizing its influence in others. It would be best to avoid either situation as both can result in diminished representation.

Given the delays caused by the pandemic, Georgia and other states will have to enact a special session to address redistricting based on the 2020 census data. State legislative and congressional districts will be decided by the Republican-led legislature. State code regulates that there will be 180 State House districts and 56 State Senate districts. Fortunately for interested citizens, the legislature will host a series of public meetings where individuals can learn about the process and provide feedback. In a state where the most recent presidential election was decided by 12,000 individuals, political parties must strive to earn Latino votes.