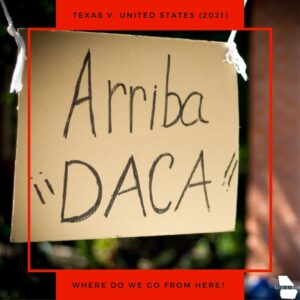 Deferred Action for Childhood Arrivals (DACA) was implemented on June 15th, 2012 during the Obama administration to give temporary status to undocumented individuals who were brought into the country as children. DACA provided eligible, undocumented people the opportunity to have legal status and work legally in the country. This created more opportunities and equity within the undocumented community. Despite this, the status of DACA has always been threatened by those who believe the program is unlawful.

The election and subsequent inauguration of President Trump in 2016 challenged the future of DACA, as the administration threatened to remove the program. In June 2020, the US Supreme Court ruled against the Trump administration’s cancellation of the program, keeping it in place.[1] At the time, this court ruling was a triumph for the DACA community and all undocumented people seeking legal status.

A year later, DACA was put forth for the US Supreme Court to decide its legality once again. This time, with different results. In Texas v. United States (2021) the court held that DACA was indeed illegal.[2] The opinion given by Judge Andrew S. Hanen stated that the program is unlawful and thus all future DACA applications will not be accepted. The judge has declared that this ruling will stand until certain issues with the program are fixed. If not fixed, DACA could be cancelled completely.

What does this mean?

The ruling has paused all future DACA applications, meaning the Department of Homeland Security will not accept any new applications. Individuals currently with DACA will be allowed to keep and renew their status. All pending applications are frozen and will not be processed for the time being.

What do we do?

The community must stand together and take action supporting DACA recipients as well as undocumented individuals. Reach out to your federal representatives and tell them to create a permanent solution and path to citizenship to not only DACA recipients, but everyone of temporary and undocumented status.

[1] “Deferred Action for Childhood Arrivals: A Timeline.” The World from PRX, www.pri.org/stories/2020-05-28/deferred-action-childhood-arrivals-timeline.

Your ticket for the: DACA: Texas v. United States