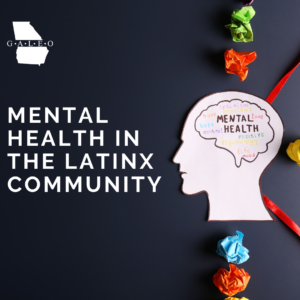 Mental health is one of the most prevalent issues today with over 10 million people that report living with some kind of mental health disorder. Disorders such as depression, anxiety, and bipolar disorders are the most common issues in the United States.[1] Communities of color, specifically, have long struggled with mental health issues and often reject helpful resources due to harmful stigmatization of the topic.

Research shows that this stigmatization comes from a mixture of religious and cultural attitudes regarding mental health.[2] In most cases, it is deemed as incredibly taboo to not only seek help, but also talk about it. Immigrants and children of immigrants struggle with separating from the ingrained stigmatization. In addition to that, U.S. born Latinx/Hispanic people are more likely to have mental health issues than foreign born.[3] Latinx/Hispanic individuals often struggle with increased stress when dealing with poverty, immigration, and education.

While cultural attitudes may hinder Latinx/Hispanic people from asking for help, there are immense inequalities that keep the community from accessing help. According to the American Psychiatric Association, barriers to accessing quality mental health resources include lack of health insurance, language barriers, and difficulties recognizing signs of mental illness. While current statistics show that rates of mental illness are lower in non-white Latinx people than white people, those same obstacles create severe underreporting.

Now, discussions on mental health have once again resurfaced as people are struggling with the aftereffects of the pandemic. Black and Latinx communities were by far the most impacted by the pandemic. With higher rates of hospitalization and death, the pandemic heightened the very obstacles that prevent access to medical resources, such as mental health, at a time where it is needed the most. It is more important than ever to close these disparities as the world tries to recover from the toll the pandemic took on our communities.

Your ticket for the: Mental Health in the Latinx Community