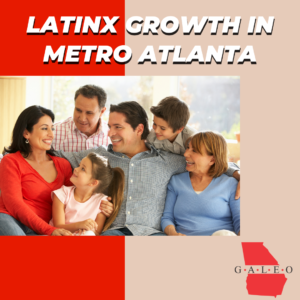 As of 2020, metro Atlanta is one of the fastest-growing regions for Latinx growth. Over 49% of all foreign-born residents in metro Atlanta identify as Hispanic and/or Latinx. According to data from the U.S. Census Bureau, between 2000 and 2010, metro Atlanta’s Latinx population grew from 268,851 to 547,400. The dramatic increase in growth within the Latinx community has proven to have a powerful economic, cultural, and social influence on the city of Atlanta.

The Census of 2020 goes beyond to demonstrate that the Hispanic/Latinx community continues to grow in the greater metro Atlanta area. After analyzing the data gathered from the 2010 and 2020 Census, Atlanta saw a 31% increase in the Hispanic population in just   10 years. The tremendous amount of growth within the Latinx community is due to the ever-growing business scene in the Atlanta metropolitan area. The metro Atlanta region has quickly become a hub for business that attracts a lot of promising job opportunities. The rise of job opportunities in the area has influenced the growing presence of Latinx people in the region. It is expected that if the trend of Latinx growth continues, in 2040 metro Atlanta will be home to over 820,000 Hispanics  and Latinx people, making metro Atlanta one of the fastest-growing regions for the Hispanic/Latinx population.

The heavy and increasing presence of Hispanics in metro Atlanta has brought about a boom in Latinx-owned businesses that contribute to the local economy. As more and more Hispanic and Latinx migrants settle in the metro Atlanta area, they establish their own businesses that spread their culture to a majority Anglo culture. Latinx culture has snuck its way into mainstream gastronomy trends, entertainment, and recreation in the greater Atlanta area. This creates an appreciation and certain level of admiration for the growing Hispanic population in the area. The cooperation of Hispanic and Latinx businesses in metro Atlanta is contributing to a growing presence and empowerment of Latinx and Hispanic residents. This newly found empowerment inspires movements for Latinx and Hispanic residents to run for elected office positions and advocate for needs of the growing Latinx and Hispanic populations in the area.

The growing Latinx and Hispanic population in metro Atlanta makes this region a focal point for a marginalized group. It’s an opportunity for Hispanics and Latinx people to thrive, establish  businesses, and advocate for their communities. The quick growth of the Latinx population in metro Atlanta demonstrates the impact of the Latinx and Hispanic community in the United States.

Your ticket for the: Latinx Growth in Metro Atlanta