Slurs in Soccer and Rampant Homophobia 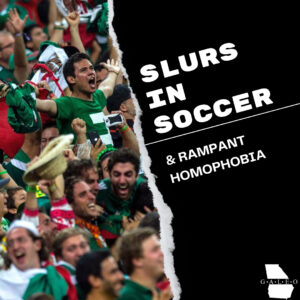 Anyone familiar with international soccer is aware of the intensity and heart that goes with supporting your team. Passionate fans create chants to show support to their team and intimidate the opposing team. But what happens when that chant is downright offensive?

The Mexican National Team and its supporters are guilty of this, as the infamous “P—” chant rages on from friendly international games to high stakes cup games. What others call tradition, many are exposing it as homophobic and has cost the Mexican National Team to go through disciplinary action. As the fans continue to chant it, many worry about the team’s future at the 2022 FIFA World Cup.

“P—” is a homophobic slur that is used against men in the LGBTQ+ community, specifically against gay men. The real meaning of the word translates to a male sex worker[1] but its context today is more hateful than its meaning. This slur is a perfect example of how machismo in Mexican, as well as in Latin American, communities triumphs and creates harmful stereotypes against non-masculine men. Now, this slur is chanted across world stages, for all to hear.

The chant is believed to have started back in the early 2000s in club soccer.[2] Supporters traditionally yell it at the opposing team’s goalkeeper to intimidate them when kicking the ball. This eventually spread to the international stage, but it was not until the 2014 World Cup where it was front and center, stirring up intense controversy on the world stage.

Due to this prevalence in the 2014 World Cup, FIFA opened an investigation against the Mexican team citing its anti-discriminatory policy. The case was later dropped as they claimed it was not offensive in the context it was chanted in.[3] Many were unhappy with the decision and demanded disciplinary action that would address the homophobia present at these games.

Since then, FIFA has implemented a three-step protocol that would occur at any game where the slur is heard. The steps can be seen as follows:[4]

However, the protocol is proving inefficient as many are now calling for the complete banning of the Mexico team and its supporters from important cups such as the World Cup. As of June 2021, Mexico supporters are banned from two upcoming World Cup Qualifiers due to their chanting in previous games. The Mexican Federation has also been fined for the chanting.

Soccer is an amazing sport filled with excitement and heart, and it has no room for rampant homophobia. The chanting of this slur showcases a problem that extends past soccer and into the rampant homophobia that exists in Latinx culture today. Conversations in the home and in the community are important to remove the stigma and achieve equality for all.

Your ticket for the: Slurs in Soccer and Rampant Homophobia

Slurs in Soccer and Rampant Homophobia