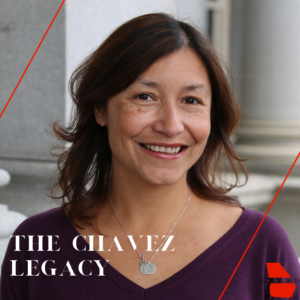 Julie Chavez Rodriguez is a civil rights activist who advocates for the inclusion of all marginalized folks. Her track record includes serving during the Obama Administration as the Director of Youth Employment and then as the Deputy Press Secretary for the U.S. Secretary of the Interior. She was recently appointed as the Director of White House Office of Intergovernmental Affairs by Joe Biden in 2021.[1]

Before becoming one of the highest ranked Latinx officials at the White House, Rodriguez was known for her activist work supporting labor rights for farmworkers in California. After receiving her bachelor’s degree in Latin American Studies from the University of California- Berkeley, she worked as program director for the Cesar Chavez Foundation. On top of her many accomplishments and glass-shattering roles, she stands as the living legacy of her grandfather, Cesar Chavez.

Cesar Chavez is renowned as one of the leading activists for farmworkers’ rights. His fight brought positive change to thousands of farm workers in California and across the United States. A Presidential Medal of Freedom recipient, Chavez’s legacy is perfectly exemplified by the work of his children and grandchildren.

Chavez’s fight always centered the voices of the unheard and until his passing, he devoted his life to that struggle. His granddaughter now stands as a key player in the current fight for civil rights by directly working with the Biden administration and being regarded as one of the most influential Latinx women in the country.

The fight for civil rights and proper representation is ongoing and it is evident through the legacy of fighters such as Chavez that there have been true strides towards equality. Julie Chavez Rodriguez is one of many legacies that will pave the way for future Latinx leaders yet to come.

Your ticket for the: The Chavez Legacy